The day the Earth changed its rotation-rate

juli 03, 2016
This week I saw a great article in Wired.com about the static test of one of the solid boosters for the SLS rocket. So I tweeted: "The Earth rotated a little bit faster that day! #rocketengine". I should have known that I cannot make these kind of statements without proving them first. One of my friends called my bluff. 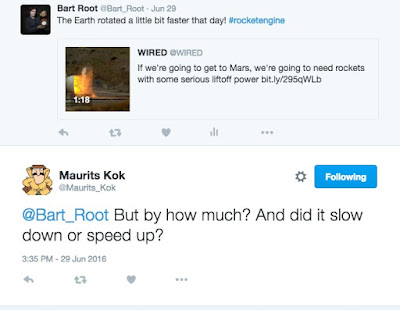 So, I replied with "Challenge accepted!". The blog post will report on my investigation and show how much the Earth speed up/slowed down by the QM-2 test of the SLS booster rocket. My investigation consists of three parts: the model, the search for reliable information, and my conclusions.

Model of the Earth with an attached booster
By igniting their propellant, rockets can produce thrust that normally propel them upwards towards space. If you fix them on the Earth they could speed up or slow done the rotation of the Earth, depending on  the direction of its thrust. Ok, hold your horses! Of course this will have a small effect, but I still need to solve the challenge proposed by my friend. So, lets sketch the situation:

After we have determined the torque, it is possible to calculate the angular acceleration, 𝞪, with help of the moment of inertia of Earth, IEarth.

We're almost there! If the angular acceleration is obtained, we can calculate the new rotational velocity by using the following equation:

I have placed a minus sign, because in my sketch the force due to the rocket counteract the rotation of Earth. The angular acceleration is multiplied by the period of the rocket burn. The rotation rate of the Earth is around 7.29 ×10−5 rad/sec. With these equations we can find the change in rotation due to the QM-2 booster test.


Information investigation
From the model we can see that there are some numerical parameters needed to calculate the actual change in rotational velocity of the Earth. They are listed bellow:
So, lets find them on the internet. We have the Wired.com article with the movie of the firing: link. In this article, I found out that the test is conducted by Orbital ATK. Googling "Orbital ATK QM-2 ground test" gave me some more information. First of all, the expected thrust is reported to be 3.6 million pounds of thrust, which is 16 million Newton of thrust (lets keep it metric). In one of the documents on the website of Orbital ATK I found some more information: 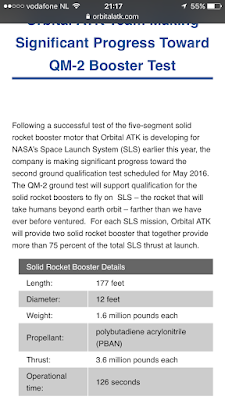 Here, also the operational time of the test was listed as 126 seconds. Somewhere else they wrote about a two minute test, so I am confident this value is ok. This means, two down, three to go.

The moment of inertia of the Earth can be found anywhere on the web, we will use 8.0 ×1034 kg m2. This is the integrated moment of inertia around the rotation axis of a differentiate sphere. My students need to calculate this for Earth, Moon, and Jupiter. Its a nice mathematical exercise, maybe for a different post.

The last two parameters were a little bit more difficult to find and made me really feel like the Sherlock Holmes of the internet. On the internet webpage of Orbital ATK, I found that their Rocket Testing Facility was in Promontory, Utah. If you type this in Google maps, you still need to go to the northeast towards the road 83. There the facility is clearly visible at latitude 41.62 degrees, which is extremely huge:
After half an hour inspecting the facility, I found two sites where the evidence of rocket tests were clearly visible. In the movie of Wired.com a large exhaust plume is visible, which affects the terrain, this must be visible on Google maps. Unfortunately, there are two sites on the Promontory grounds, so I still did not know exactly the location and direction of the thrust vector. Lets zoom in:

How to pick between the two sites? I went back to the movie posted on Wired.com and made stills that gave me confidence about the correct site where the test took place. In the beginning of the movie the rocket is ignited and the background is visible. Here, we see visual evidence number 2. 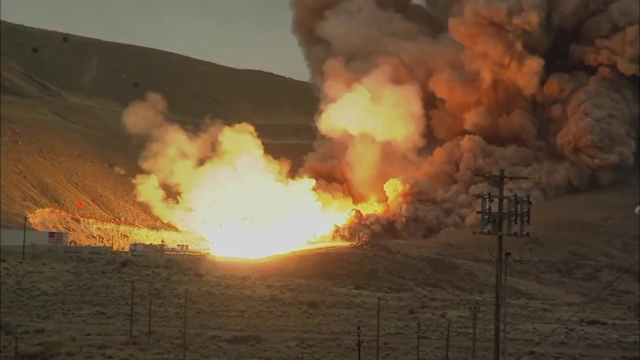 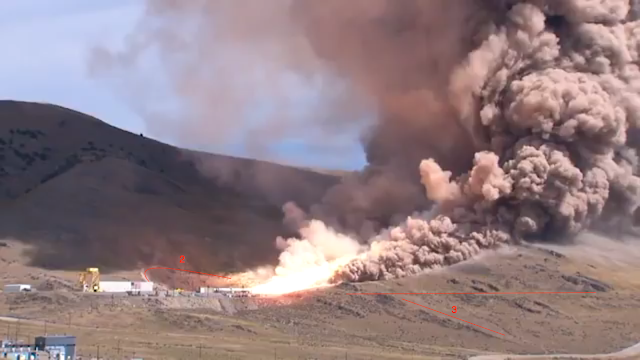 Here, both the indent behind the test location is seen and a straight road and geologic structure in the right bottom of the picture. These visual objects can only be linked to the south test site in the map and are not seen on the northern test site. This make me confident that the location of the QM-2 test is the southern test site. Finally, this allows me to determine the direction of thrust and calculate the east-west component of the thrust vector that is responsible for change in rotation rate. 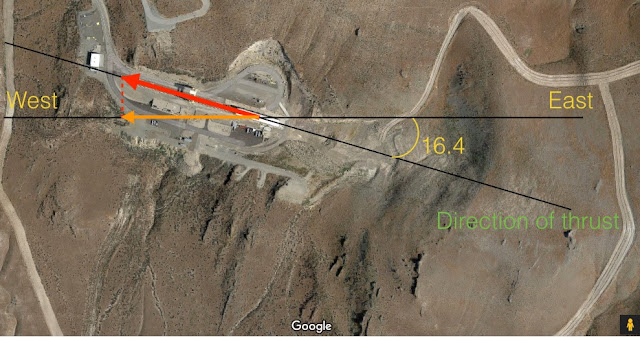 The thrust of the rocket is towards the north-ish-west, and therefore it will slow down the Earth instead of speed up. I was wrong in my tweet (always factcheck, boys and girls), but I have answered part of my friends challenge! Now for the last part, we have all the information to calculate the amount of slow-down of Earth's rotation.

I measured the angle (16.4 degree) and this results in an east-west force of 15.35 million Newton, slightly less than the full thrust of the rocket. Continuing, the arm of the torque, r, we also have to decompose:

With the averaged radius of the Earth, R = 6371 km, the arm of the torque becomes r = 4762.7 km, together the torque is calculated to be 7.31 ×1013 Nm. By dividing the calculated torque by Earth's moment of inertia will result in an angular acceleration of α = 9.14 ×10-22 rad/sec2. The angular acceleration is very small due to the huge moment of inertia of the Earth. Still, I am on a quest to answer my friend's last question.

From Orbital ATK's website, I found the duration of the test (Δt = 126 secondes), which results in a rotation-rate change of 𝝎 = 1.15 ×10-19 rad/sec, or 6.6 ×10-18 deg/sec. This tiny slowing-down of the Earth (14 orders smaller than its current rotation-rate) will only have a one degree difference in position after a billion years. So no, we will not have observed the change in rotation-rate due to the QM-2 testing of Orbital ATK. It did teach me to always fact check my statements on twitter, somebody could call your bluff.
Earth sciences QM-2 test rocket rotation-rate 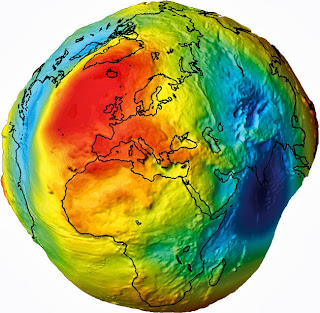 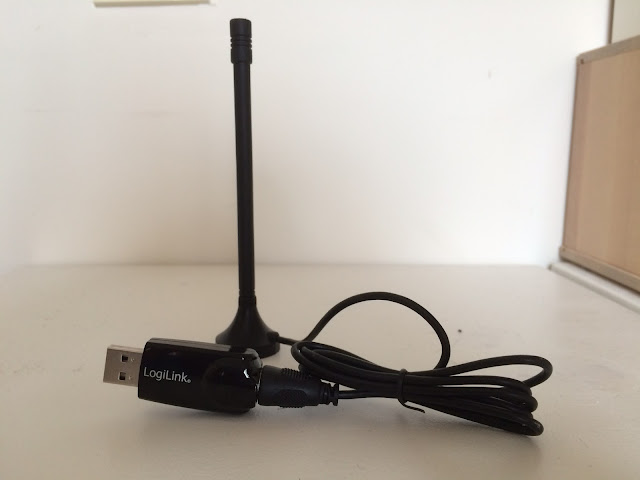 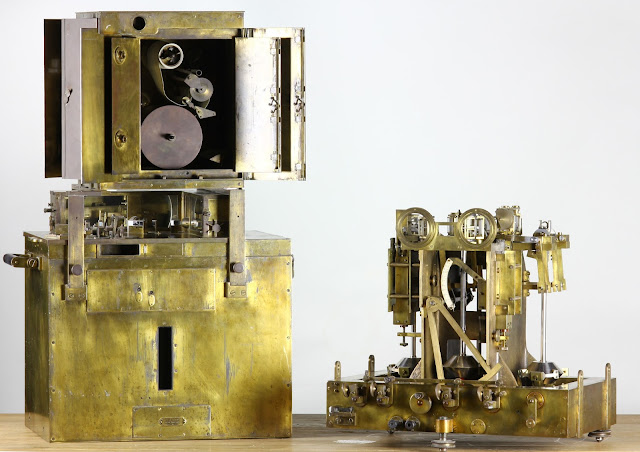